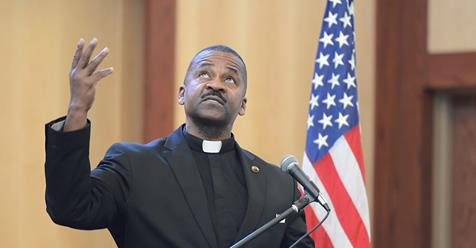 How California's LGBT Therapy Ban Could Ban Christianity Itself

It is ostensibly a ban on gay and transgender 'conversion therapy,' but the bill's vague and sweeping text could affect essentially every institution of every religion that affirms sexual complementarity.

…“This reads like it could easily ban pastors, rabbis, and imams from preaching or counseling parishioners on same-sex attraction or desires to approximate the opposite sex. It clearly could also apply to a person who is paid to educate, exhort, and counsel parishioners on their faith simply stating what the Bible, Torah, or Koran, together with their respective theological traditions, teaches on human sexuality.”…

Three-quarters of California’s state assembly supported a bill that has striking implications for American citizens’ first freedoms, in that state and nationally. It is ostensibly a ban on gay and transgender “conversion therapy,” but the bill’s vague and sweeping text could affect essentially every institution of every religion that affirms sexual complementarity.

We’re talking churches, schools, religious charities, summer camps — every forum that involves a financial transaction could be banned from allowing any discussion of basic doctrines of sexuality that Christianity, Judaism, and Islam, among others, have held for thousands of years. We’re talking core doctrines of religions adhered to by billions of people being outlawed from discussion in any forum that involves money changing hands, possibly even houses of worship themselves.

I know that sounds outlandish, but that is a plain reading of the bill text. Let’s look at it.

The bill amends the state’s commercial fraud laws as follows:

The following unfair methods of competition and unfair or deceptive acts or practices undertaken by any person in a transactionintended to result or that results in the sale or lease of goods or services to any consumer are unlawful:… Advertising, offering to engage in, or engaging in sexual orientation change efforts with an individual. (emphasis added)

This reads like it could easily ban pastors, rabbis, and imams from preaching or counseling parishioners on same-sex attraction or desires to approximate the opposite sex. It clearly could also apply to a person who is paid to educate, exhort, and counsel parishioners on their faith simply stating what the Bible, Torah, or Koran, together with their respective theological traditions, teaches on human sexuality.

To state that something is authoritatively true and explain why and how, which are inherent functions of religious teaching, is an attempt to persuade people to believe it, and therefore live accordingly. That would apply to stating something like “God made humans male and female,” a direct quote from three different Bible passages (1, 2, 3), including the words of Christ himself.

That contradicts LGBT ideology that men and women are interchangeable. Saying so, presenting an alternative idea, could persuade people to live accordingly. The bill attempts to ban this. Thus, the bill  seems to gag religious leaders from stating their own faith’s teachings so long as that leader is compensated for doing so.

I’m not the only one reading it that way. An Alliance Defending Freedom legal analysis gives these examples, among others, of activities the bill would ban:

“At its core, AB 2943 outlaws speech, whether offered by a licensed counselor, a best-selling author, or even a minister or religious leader,” ADF’s analysis says. The bill’s speech ban is triggered when money changes hands to facilitate the speech, which is why it’s an amendment to the state’s commercial fraud law. “AB 2943 labels such faith-driven activity as fraudulent and deceptive practices, subjecting anyone who engages in them to ruinous lawsuits, punitive damages, and attorneys’ fees,” the analysis says.

Essentially all U.S. clergy who adhere to the orthodox teachings of Islam, Christianity, and Judaism financially “transact” with their congregations to provide services such as preaching, teaching, and counseling. ADF notes the law the bill would modify “specifically commands that it be ‘liberally construed and applied.'” It also includes no religious exemption, which might mitigate some of these effects I’ve described (although it wouldn’t alleviate all). We’re talking essentially outlawing major religions here. Or, at least, forbidding people from practicing or even learning about a significant component of their own faith.

That is of course banning the faith entirely, because religions are a package deal. The entire point of a religion is to offer comprehensive ways of understanding and contextualizing the universe and our place in it. To ban part of it is to ban the whole. It’s like saying “We’re not banning math, only multiplication.” Okay, you aren’t free to do real math without the possibility of using multiplication.

If it would gag pastors, the bill would also gag employees of religious institutions such as schools, summer camps, churches, universities, daycares, hospitals, mental health clinics, conference and retreat centers, and poverty relief organizations. It would gag employees of non-religious institutions whose religion informs their work, as do many employees in foster care, counseling, mental health, education, and other social welfare fields. Any person or organization that takes money for services or goods and expresses an idea — even to willing listeners! — that could be construed as encouraging sexual orientation change would be liable for emotionally and financially devastating lawsuits.

When LGBT activists were pushing for legal recognition of same-sex relationships, they told us, “What we do in the bedroom has nothing to do with you.” We heard a lot about “love” and “tolerance.”

It’s impossible to square those promises with this bill — or disorienting innocent kindergarteners with the idea that boys can turn into girls, or using government force to ruin the private businesses of religious believers for not wanting to participate in acts their deepest beliefs condemn, or insisting HIV-positive people have no legal obligation to disclose that fact when they risk transmitting that disease to non-consenting people, or shutting down organizations that help orphans find homes, or pushing to mutilate minors‘ natural and healthy body parts, or hounding an onscreen prostitute into suicide for not wanting to participate in gay sex.

The LGBT movement keeps telling us they want nothing more than to coexist with the same freedoms we all have. They want “equality.” But it looks like that really means severely curtailing our freedoms into some activists’ view of an extremely limited way of life that precludes deep and old religious understandings of the world. It looks like their version of “equality” means “equally limited, micromanaged, harassed, afraid, and coerced by a narrow, uniform vision of existence controlled by people with big axes to grind.”

Joy Pullmann is executive editor of The Federalist and author of "The Education Invasion: How Common Core Fights Parents for Control of American Kids," out from Encounter Books in 2017