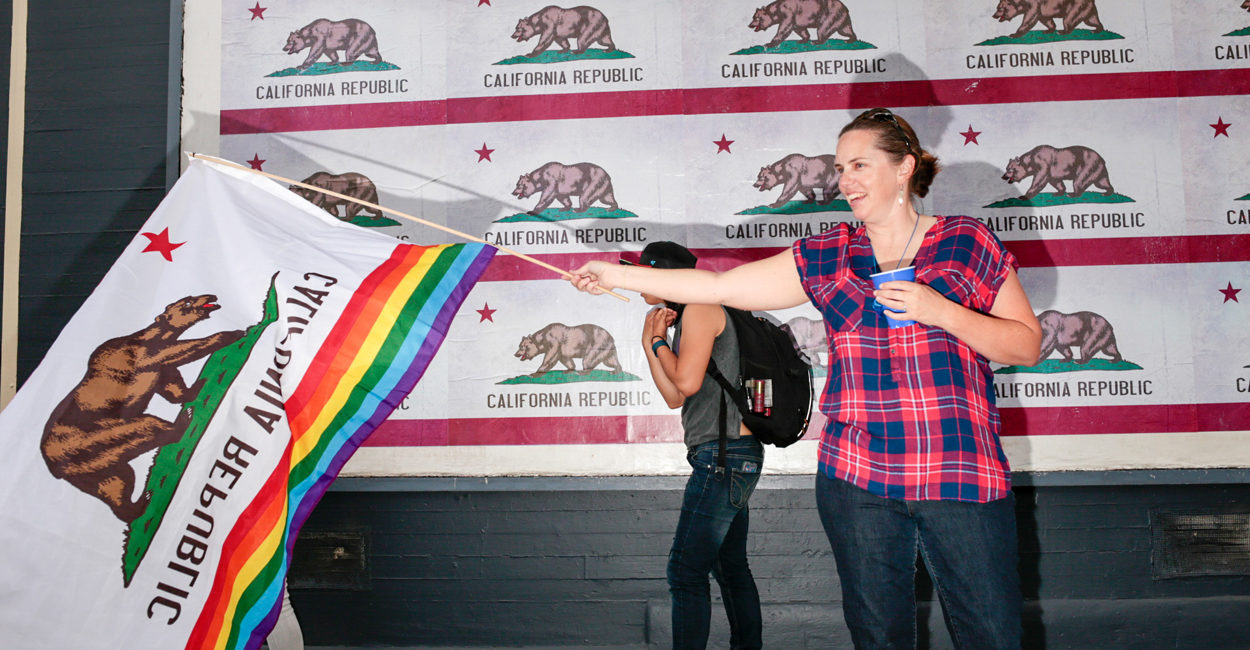 Summit Ministries Cancels Sessions in California - Will Not Compromise Truth

The bill essentially would “ban all practices that the state deems attempting to change one’s sexual orientation—including practices as indirect as the publishing of certain material,” The Heritage Foundation’s Monica Burke argues. Pictured: A participant in the annual "Dyke March" parade in San Francisco on June 24, 2017. (Photo: John Orvis/Newscom)

A Christian educational organization has canceled two leadership sessions in California because a bill moving through the state Legislature would censor speech and religious freedom.

California “is just about to ban Christians from giving advice about sexual ethics based on the Bible that has been followed by billions of people for thousands of years,” Summit Ministries President Jeff Myers told The Daily Signal in a phone interview Wednesday.

“We take a stand and always have that marriage is best between a man and a woman for life and that, while people experience sexual attractions of all kinds, it is possible, even in a culture like ours, to let the Bible guide our sexual ethic,” Myers said.

The bill before the California Legislature “would in effect ban all practices that the state deems attempting to change one’s sexual orientation—including practices as indirect as the publishing of certain material,” Monica Burke, a research assistant in The Heritage Foundation’s DeVos Center for Religion and Civil Society, wrote in a recent commentary.

The liberal Left continue to push their radical agenda against American values. The good news is there is a solution. Find out more >>

The California Assembly, the state’s lower house, passed the bill April 19 by a vote of  50-18. The state Senate’s Rules Committee was scheduled Wednesday to determine what committee or committees will take up the bill, according to the California Family Council.

Burke warned that passage of the legislation “would impose widespread censorship that could implicate authors, speakers, counselors, colleges and universities, and even religious leaders seeking to address unwanted same-sex attraction or gender identity confusion.”

Colorado-based Summit Ministries announced Monday that it canceled two conferences, one June 10-23 and the other June 24-July 7, that were to be held at Biola University near Los Angeles over concerns that California will forbid parts of what the organization teaches.

It the bill passes, Burke wrote, California law would penalize religious leaders who speak on biblical teachings such as marriage being the union of one man and one woman and sexual intercourse being reserved for marriage.

Lesbian, gay, bisexual, and transgender activists and LGBT organizations have supported the legislation.

“It expands the definition so far so that anybody who says, ‘You don’t have to live a gay lifestyle,’ or somebody who writes a book saying its possible to live as a celibate person or, ‘It is best for you to live out a biblical ethic of sexuality,’ those statements, under this law, could constitute criminal fraud,” Myers said.

“AB 2943 has already had a chilling effect on civil society as individuals and institutions like Summit Ministries censor their own speech to avoid undergoing costly lawsuits,” Burke said. “AB 2943 sets a dangerous precedent for censorship by empowering the government to punish and silence viewpoints it disfavors.”

Myers said he chose to cancel Summit Ministries’ California events to protect the students who would have attended.

“There are lots of options available to us for fighting this law, and we are using all of them, but we just don’t put kids in the line of fire,” he said.

Myers said his organization will work to make sure that no student who wanted to attend either of its California conferences will miss out.

“If they say, ‘We could have come had it been in California, but we don’t have the money for an airplane ticket to go to Colorado or Tennessee or Pennsylvania,’ those are our other locations, then we’ll help them,” Myers said. “We want every single student who was planning to be there to still be there, but they will be in different locations.”